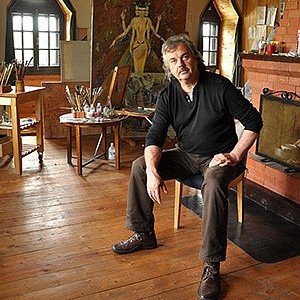 A few exhibitions in Paris and in Hamburg

The painter Victor Pavlovich Goloviy was born in the city of Kaliningrad (Königsberg) in 1955. His facility for fine art was noted at an early age when he began to attend secondary school and on the recommendation of his teacher he took up study at his local art school where he acquired the initial skills of working from the model while also developing the use of art materials. In 1976 the young artist entered the Faculty of Painting of the Academy of Arts whose graduates include such names as Bryullov, Semiradsky, Repin, Feshin and Malyavin as well as many other outstanding masters of Russian Art. With these great painters as examples the premises of the Academy served as a source of inspiration for the next generation of talented students.

Like any other author Viktor has his own favored techniques but notwithstanding the success of many pieces, he does not “duplicate” his compositions nor offers various versions, but, rather, he tries to find new solutions each time.

Many private individuals and collectors have responded to and acquired Viktor’s work and he has participated in major exhibitions each year with the number of exhibitions exceeding a total of eighty. The result is that numerous hallmark pieces are now held in private collections in Russia, the USA, the UK, Germany, Japan and China. In the January 2002 issue of the magazine “Empire of Arts” an article was published on the artist’s creative activity under the title “Through fragments of the mirror”.